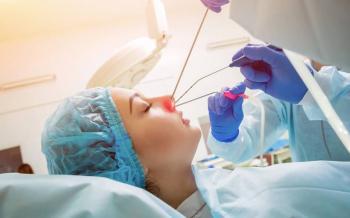 REDUCTION OF THE NOSE WITH RADIOFREQUENCY

The turbinates are the part of the nose that works to warm and humidify the inhaled air. It is often described as nasal concha. It is full of warm blood vessels that try to humidify the air and prevent cold air from reaching our lungs .

In the treatment of nasal congestion and snoring, which are caused by the enlargement of the lower concha (concha) and usually cause more complaints at night, the concha should be reduced as needed, and different methods are used for this.

The lower nasal meats, which have a very important place in nasal functions, should never be completely cut and removed. Following such surgeries, which were frequently performed in the past, nasal functions deteriorate, and the solution of complaints such as nasal congestion, dryness, crusting, recurrent infections and burning sensation, as well as negative results in respiratory physiology. extremely difficult, sometimes even impossible. For this reason, it is necessary to avoid excessive reduction and to prefer techniques that do not damage the functional outer surface mucosa of the nasal concha, during the procedures performed to reduce the lower concha.

Reduction of the Lower Concha with Radiofrequency

It is based on the principle that the heat damage in the tissues is healed by shrinking and hardening following the introduction of radiofrequency energy with a special device into the soft tissues with rich vascular content under the mucosa of the lower turbinates located on the side walls of the nasal cavities. The hard healing tissue formed within 4-6 weeks following the procedure prevents the shrinkage of the meat, as well as the enlargement caused by external stimuli or body position.

During the concha radiofrequency procedure, it is aimed to reduce the turbinates without removing any bone or tissue from the nose. A needle-like device is inserted into the turbinate and heat is transmitted to the tissue with radio waves, aiming for controlled damage. This process causes scar tissue to form, reducing the size of the turbinates. With the shrinking of the turbinates, the difficulty in breathing disappears.

Concha radiofrequency is  the most frequently preferred procedure in recent years and is performed under local anesthesia without stunning. The process takes about 15 minutes in total. After the procedure, you can go home after a 30-minute rest period.

General anesthesia is not required for this procedure. However, if patients have septum deviation (nasal cartilage curvature) as well as lower turbinate enlargement, the procedure is performed in the same session and under general anesthesia.

Tampon after Concha Radiofrequency is not used, you can go home immediately after the procedure performed in outpatient clinic conditions.

After this procedure, there is no swelling, bruising and shape change in the nose.

Normal life is resumed immediately after this procedure. You can start work.

Moisturizing sprays and creams can be used to prevent drying and crusting in the nose after Concha Radiofrequency.

Procedures involving reduction of turbinates are also often recommended for people undergoing septoplasty. Bending of the nasal septum may cause compression of the turbinates and difficulty in breathing. Reducing the turbinates during the septoplasty procedure helps to open the airways even more.

Usually, there is no pain and pain in the healing process. There is no physical change in the nose and does not include long-term side effects such as loss of sense of smell. After the procedure, crusting may occur in the nose for about 3 weeks.

Concha radiofrequency operation can also be easily performed during aesthetic or functional nasal surgeries, operations for chronic sinusitis, and operations performed for other reasons in patients with nasal congestion complaints.

Following a good local anesthesia, patients can return to their daily activities immediately following this application, which does not feel pain during and after the procedure.

The success rate of radiofrequency treatment, which can be applied safely and comfortably in the treatment of mandibular growths, which plays a major role in nasal congestion, which has serious negative effects on the quality of life, is around 80% in a single session. After the surgery, an increase in nasal congestion can be observed due to swelling in the lower turbinates or crusting due to wound healing on the mucosal surface in the early period.

The expected results of radiofrequency application begin to appear within 15-20 days, and the shrinkage in the turbinates may continue for up to 6-8 weeks. In almost one-fifth of the patients, after the 2-3 month recovery period after the radiofrequency procedure, the procedure may need to be repeated if the desired nasal opening cannot be achieved completely.

In patients with successful results with radiofrequency, if there are diseases such as allergic rhinitis, vasomotor rhinitis, the patients are constantly in dry and polluted air, they are in smoky or cold environments, or if they use vasodilating drugs such as blood pressure medications, the lower nasal concha may grow back after a while. Repetition of the radiofrequency procedure or endoscopic turbinate reduction surgery is recommended in these patients.

Concha radiofrequency  procedure is one of the most preferred procedures by patients and physicians due to its advantages such as high chance of success for each application, not requiring tampons, being performed under local anesthesia and not causing bleeding, despite the disadvantages of recurrence of complaints.