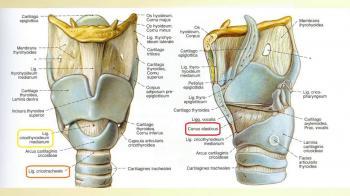 The larynx is a part of the respiratory tract and is located in the anterior middle part of the neck, under the chin, between the pharynx and the trachea. It is a mobile organ, it moves up and down with swallowing.

The epiglottis is a leaf-shaped cartilage that expands upwards, with a single cartilage. During swallowing, it closes the larynx and prevents food from escaping into the trachea. Thyroid Cartilage (Adam's apple-Cartilago thyroidea) It is a large cartilage in the form of a book leaf with an opening facing the back. Vocal cords, false vocal cords and muscles, which are important in voice formation, attach to this cartilage in the anterior part. The cricoid cartilage (cartilago cricoidea) is in the form of a thimble and is located anteriorly between the wider trachea and the thyroid cartilage.

Double Cartilage Aritenoid articulates with the posterior upper part of the cricoid cartilage. It is the attachment site of the posterior parts of the vocal cords. There are two supporting cartilages attached to the upper and lateral parts of the arytenoid. These are the corniculate and cuneiform cartilages. Laryngeal Ligaments (Ligeman) The skeletal roof of the larynx is connected to the neck by elastic structures from above and below. Main upper carrier ligament Temporol Bone (Ear)'a hyoidbetween the bones. The opening of the hyoid bone is a large bone that faces posteriorly and provides the movement of the larynx with various ligaments and muscles.

Thyrothyroidoid membrane; This membrane has a fibroelastic structure and is in the form of a wide curtain between the hyoid bone and the thyroid cartilage.

Conus elasticus membrane: (Cricovocal membrane) It is a curtain that starts from the cricoid cartilage and continues towards the vocal cords and attaches to the vocal protrusion of the arytenoid cartilage from the thyroid cartilage, which we call the vocal ligament. 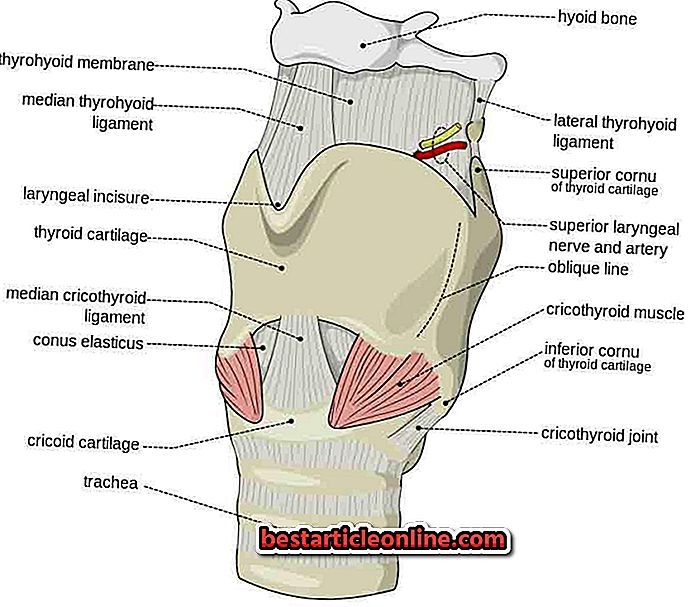 These muscles in the larynx structure control the airway. They control the resistance of the air between expiration (breathing) during phonosion (during sound production), and also prevent foreign substances from escaping into the lower respiratory tract during swallowing. 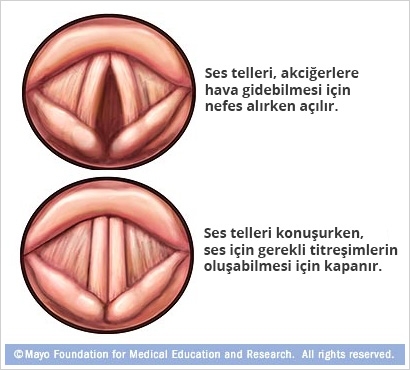 The thyroarytenoid muscle stabilizes the position of the two cartilages, stretches the vocal cords and increases their length.

The cricothyroid muscle is usually relaxed at low frequencies. However, it contracts strongly in falsetto or high tone. Thanks to its synergistic (harmonious) work with the posterior cricoarytenoid muscle, the vocal cord space is maximally enlarged.

The cricothyroid muscle plays an important role in the control of foundational frequency in phonation and respiration. Arytenoid muscle: It is a single muscle located on the posterior surface of both arytenoid cartilages. It has straight and cross fibers. This muscle brings the arythyroids closer together and provides the approach (adduction) of the vocal cords.

Vocal muscle bundle musculus tatirol thyrooritioid exsternus (external) musculus vocalis (voice muscle or internal thyroarithyroid muscle) Anteriorly, the laryngeal surface of the thyroid cartilage arises from the middle part and attaches to the free edge of the concelasticus and lateral to the vocal ridge. The vocal muscle is attached to the vocal ligament. They are located in the vibrating part of the vocal cord.

The musculustriaritoid exsternus (Outer bundle) attaches from the middle part of the laryngeal surface of the thyroid cartilage posteriorly between the vocal process and the lateral (lateral) cricoarytenoid. Unlike the inner bundle, the cord extends along the outer lateral neighborhood of the vocalon and attaches to the arytenoid cartilage.

Thyroarytenoid Muscle Rotates the arytenoid cartilage anteriorly and inward. It is the opposite of the cricothyroid and posterior urcrico arytenoid muscle. It provides the task of closing the false vocal cord by bringing it closer to each other (sifintel) together with the transfers arithyroid muscle. This muscle brings the vocal cords closer together, stretches them and increases their thickness. It is the most important muscle for phonation. (It is the muscle of the vocal cord itself.) Therefore, the thyroaryroid muscle contains two bundles. The Outer Bundle contains fast-twitch fibers and provides dynamic movements. The vocal part (inner bundle) controls the backbone of the vocal fold. The outer bundle (Cotiral compartment) provides the closure of the vocal cords. Approximation of the vocal muscle (inner bundle) can be divided into two as inferule and spherule (lower and upper).

The posterior cricoarytenoid muscle attaches to the pits on the sides of the midline on the posterior surface of the croleoid cartilage, and its fibers extend outward and to the tip, extending to the lateral projection surface of the arytinoid. With the movement of this muscle, the arytinoid cartilages turn sideways and backwards, and as a result of this rotation movement, the vocal cords move away from each other. This is called the Abdulesion movement. This muscle is the main abductor of the vocal cord. (Opening muscle) during phonation acts opposite to the stretching function of thyroarytinoid and jack thyroid muscle and relaxes it.)

The lateral cricoarytenoid muscle is attached to the anterior surface of the lateral (outer protrusion) projection of the arytinoid, starting from the Dos-upper surface of the cricoid arch (arch) and the conus elastus and moving upwards posteriorly. This small quadrangular muscle pulls the arythyroid cartilage anteriorly and outward, bringing the vocal cords closer to the middle. (Adductor Function) The posterior crico is the opposite aspect of the arythroid muscle.

In terms of function, the vocal cords are divided into 3 histological divisions.

b) The lucial layer of the Lamina Propria.